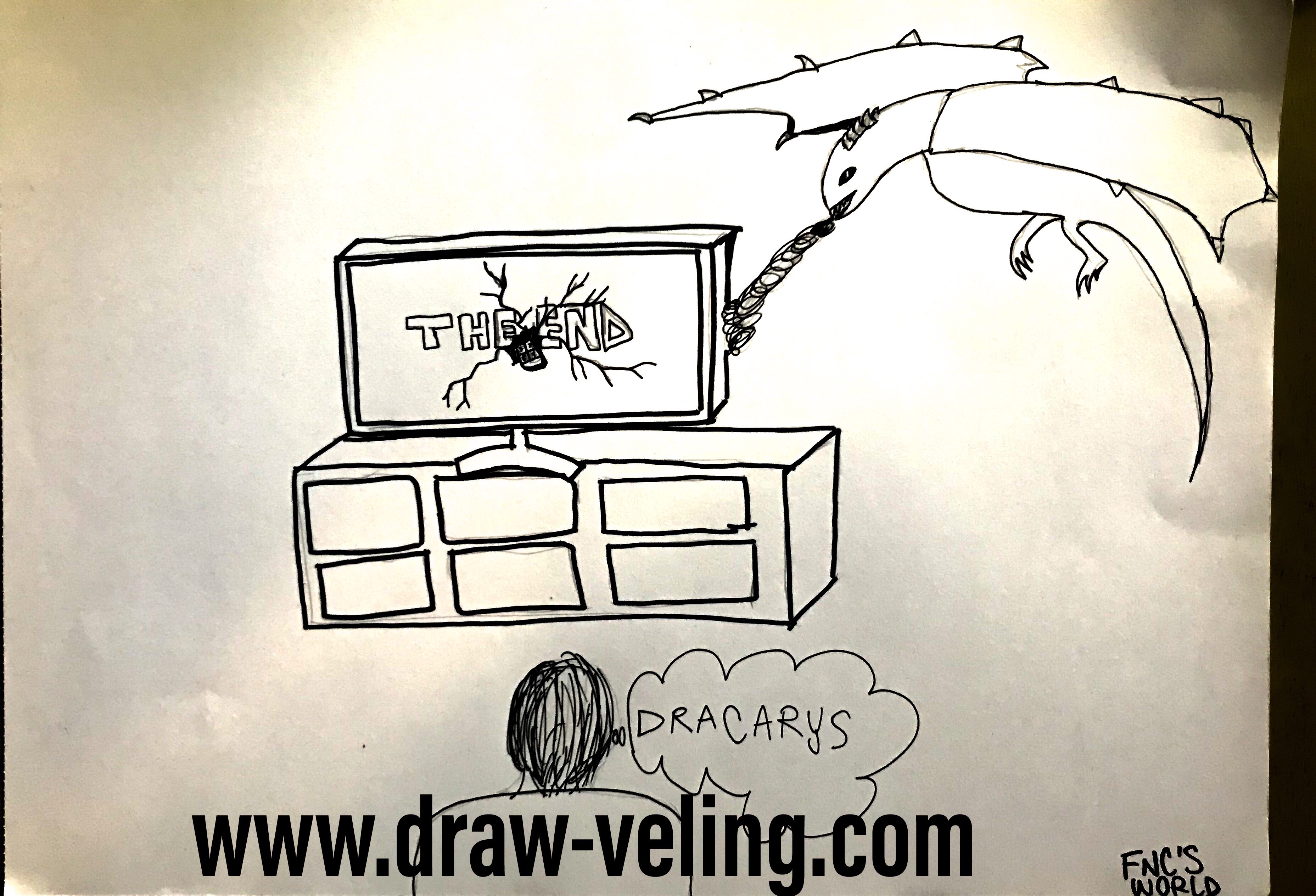 Today’s drawing describes the disappointment of watching the end of one of my favourite TV’s show: Game of Thrones.

The first season was aired in April 2011, but I started it when the second season was already out in 2012 (right before moving to London).

Let’s make it clear, this post it’s also for those that haven’t watched any of the series.

Let’s try to highlight the most important things in case of non-fan reader.

Since the beginning I was in love with the character of Daenerys Targaryen.

She was sold to the chief of an army of savages (Dothraki) who didn’t have any respects for women in general.

With her charm she turns her “owner” Khal Drogo into her lover, once he dies she takes control of his sexist army.

She then embarks into a mission to free the world from slavery.

The most epic moment of the entire show is when she attacks the city of Meereen with the slaves previously freed.

The siege of the city it’s carried out in the Slaver’s bay, throwing against the walls of the city, the collars that were used by the masters to chain theirs slaves ✊

I also had a lot of respect for the Stark’s family (not all of them).

What I admired was their dedication to the cause for the North, free and independent from the crown. Any reference is purely coincidental 🤔

I apologise in advance, but I never had any sympathy for the Lannister.

Their only values were money, wealth and prestige 🤮

The white walkers also didn’t stand a chance, their only aim was to destroy the entire human kind 😳

As the show evolves, around season 5 I had my first breaking point, I almost stopped watching it but I kept going hoping for a better and not bitter end.

In case anyone hasn’t watched the final yet, or if anyone is thinking to do a GOT binge, I’m not going to spoil how it ends, I’m going to share how I wanted it to end.

During the above breakdown, there was all this fuss around Arya Stark training to be a faceless person with the ability to become someone else with her aspect.

Brandon Stark was mastering his skills of mind controlling people and animals.

The army of the dead, who we have heard since the first episode, they were destroyed in less than 15 minutes with a simple knife stab of Arya.

I would have used Brandon to take control of the commander of the White Walker, and then make them destroy themselves.

In the meantime, Daenerys, Jon Snow and everyone else, united to defend and fight against this threat of bringing the world to an end.

Arya could have carried out her plan of revenge to kill Cersei Lannister and her brother/lover Jamie who tried to save her one last time.

With the White Walkers defeated, the lobbies of the Lannister and any other wealth family wiped off, Daenerys would have been able to dismiss all the power everywhere in the Seven Kingdoms, to guarantee the freedom of the North and any other “Community” so that they could rule themselves without a Rulers.

I mean yeah this is “Fantasy” right? Not sure, people united are stronger then the oppressors.

5 thoughts on “My Game of Thrones”